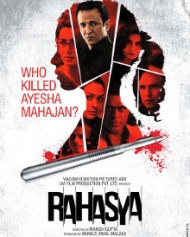 Rahasya movie is based on the infamous Arushi murder case. The film explores the plight of a couple who have not only lost their only child but who also have to bear the trauma of the father being accused of killing his own daughter.

The narrative has been presented in the form of a classic Agatha Christie whodunit told from the point of view of real-life police investigator - Sunil Paraskar - played by actor Kay Kay Menon.