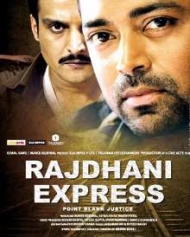 Drama
Release Date : 04 Jan 2013
Cast : Leander Paes, Jimmy Sheirgill
Director : Ashok Kohli
Synopsis
Rajdhani Express movie is an Indian socio-political thriller. The story is based on the character Keshav who is as errand boy for a gun runner. On one errand Keshav steals the weapons and books a ticket on the Rajdhani Express from Delhi to Mumbai to escape.

However his fate follows him through his escape onto the train in the form of Yadav, the DY Commissioner of ATS.

While trying to apprehend Keshav, Yadav manages to extracts political mileage from the situation weaving a web, endangering not only Keshav, but also his co-passengers. However The Commissioners has his ulterior motive to get even with his boss, the Minister Of Home, whose parents also happens to be on the train.

Distanced, ridiculed and humiliated, he reacts by pointing his gun at them....