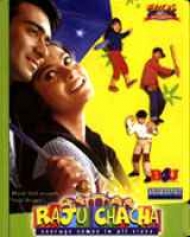 Drama
Release Date : 20 Dec 2000
Cast : Ajay Devgn, Kajol
Director : Anil Devgan
Synopsis
Raju Chacha is based on the character Siddhant Rai who is a single father, looking after three young children. All four of them live a wealthy and comfortable lifestyle, which changes suddenly when Siddhant passes away after a car accident.

Siddhant's shady relatives hire a former jailbird and con-man by the name of Shekar to pose as their paternal uncle, Raju, which he does for a hefty sum of money. When Raju is introduced to the children, he is an instant hit with them, as well as their Catholic governess, Anna. Then the Rai family are stunned when another young man enters their lives - claiming to be the real Raju Chacha.