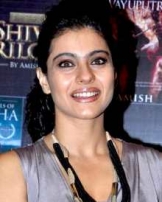 Kajol Devgan, née Mukherjee, popularly known as Kajol, is a Hindi film actress. Kajol made her acting debut with Bekhudi (1992) and had her first hit with her second film Baazigar (1993) along with Shahrukh Khan, with whom she later went to deliver some of the biggest Bollywood hits like Dilwale Dulhaniya Le Jayenge (1995) and Kuch Kuch Hota Hai (1998). Her performances in both the films were praised and earned her two Filmfare Best Actress Awards.

Kajol married Bollywood actor Ajay Devgan on February 24, 1999. On April 20, 2003, she gave birth to a daughter, named Nysa, which means Goddess of purity.

Kajol left her school St. Joseph's Convent at Panchgani and started her career at the age of seventeen. Although her debut film, Bekhudi (1992) was not a great success at the box office, her performance was noticed and she went on to work with big production houses in India.

In 1993, she shot to fame with her second film, Baazigar, opposite Shahrukh Khan. The film was her first major hit, and her pairing with Khan was appreciated. She later went on to make a popular pairing with him in a number of films, all of which were box office successes.

Her first release in 1994, Udhaar Ki Zindagi, was a box-office failure. Despite that, her performance in the film was much appreciated by critics, and she won the BFJA Best Actress Award for this film.