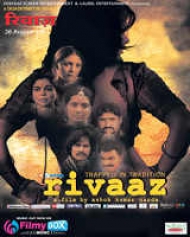 Social
Release Date : 16 Sep 2011
Cast : Deepti Naval, Reema Lagoo
Director : Ashok Nanda
Synopsis
Rivaaz is a film against exploitation, a film about dignity, about hope of women who are traded in the name of tradition.

Family-based Prostitution in which exists in many districts. But unfortunately Our Law and Order System does not consider this as a major issue.

The system which started as a community tradition (rivaaz) now operating as a money-making trade within the knowledge of the lawmakers and protectors.

Watch Rivaaz. And see if you can take a step to make a difference...