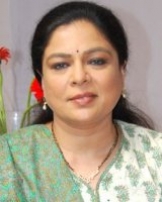 Reema Lagoo is a Marathi actress who has appeared in a number of Marathi as well as Hindi films.

Reema Lagoo was born as Nayan Bhadbhade in 1958. Her mother was a well known actress on Marathi stage. Her acting abilities were noted when she was a student at the Huzurpaga HHCP High school in Pune. Her professional acting started soon after finishing high school.

Her first acting jobs were on Marathi stage. In the late 1970s, she started acting in Hindi & Marathi films. She married the marathi actor Vivek Lagoo. After marriage, she took the name Reema Lagoo. She has a daughter named Sansui (sanu) Lagoo who lives in mumbai.

Lagoo has mostly acted in supporting roles; she has acted with some of the biggest names in the Hindi film industry. Starting out with television serials, she rose to prominence with the film Qayamat Se Qayamat Tak (1988) where she played Juhi Chawla's mother. She then starred in the hit film Maine Pyar Kiya (1989) as Salman Khan's mother.

Mostly playing motherly roles, she has also played a dancer in Aakrosh (1980) and a cold, business woman in Yeh Dillagi (1994).

She has also delivered a challenging performance in Vaastav: The Reality (1999); portraying an underworld don's (Sanjay Dutt) mother who kills her own son. Lagoo has also appeared on the Marathi show Maanacha Muzra, which honours Marathi personalities.

She is known mostly in Bollywood for playing the mother of actor Salman Khan's character.

Reema Lagoo passed away at the age of 59 after reportedly suffering from cardiac arrest.