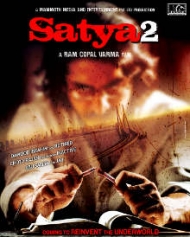 By the year 2013, Mumbai underworld was erased by Mumbai Police. Satya , a man without a past, comes to the city envisions the rebirth of his company.

Nothing about him is what one would expect from a conventional don, neither his age nor his built. But there is something about his eyes and the way he looks at people. His stare can spread more fear than a hard core act of violence. A man of minimal words, and a million mind-games, Satya is as much a part of the crowd as he is the commander of it, as mysterious as he's out in the open. The...