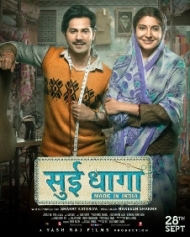 Sui Dhaaga - Made In India

The movie depicts the unbelievable transition of an unemployed married man to a self-employed business owner. In Sui Dhaaga, Varun will be seen essaying the role of a tailor.

'Sab badhiya hain'. That's the lens through which Mauji (Varun Dhawan) sees life at its best or worst. Be it his peevish father (Raghuvir Yadav) who thinks he is good for nothing or his barely-existent relationship with his wife Mamta (Anushka Sharma) or his snappy boss; in Mauji's land, 'Sab badhiya hain'!

Until one day at his employer's son's wedding when Mauji is subjected to humiliating...