The World Before Her 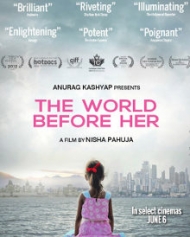 The World Before Her

Drama
Release Date : 06 Jun 2014
Cast : Pooja Chopra, Marc Robinson
Director : Nisha Pahuja
Synopsis
The World Before Her shifts between the worlds of the Miss India pageant and a Hindu fundamentalist camp for girls. In one, Ruhi Singh is a small-town girl competing in Bombay to win the Miss India pageant-her ticket to stardom.

In the other India, Prachi Trivedi is a young, militant leader at a camp for girls run by the Durga Vahini,the women's wing of the VHP. Here she preaches violent resistance to Western culture, Christianity, and Islam.

Moving between these divergent realities, the film creates a critical, provocative portrait of the world's largest democracy at a key transitional moment-and of two women who hope to shape its future.