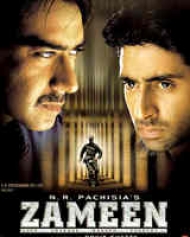 U/A | Action
Release Date : 26 Sep 2003
Cast : Ajay Devgn, Abhishek Bachchan
Director : Rohit Shetty
Synopsis
Zameen film is based on the hijacking of Indian Airlines Flight 814 by terrorists. An Army colonel (Devgan) and his commandos capture a dangerous terrorist. The other members of the terrorists' organization hatch a plot to hijack an Indian jet and demand his release in exchange.

In Mumbai, ACP Jay (Bachchan) is hot on their trail. He discovers Army's involvement in the case and has to work together with the colonel. However, there are some skeletons in the closet.