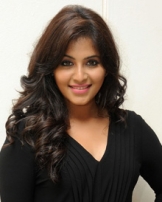 Anjali is a South Indian film actress and model, who mainly works in the Tamil, Telugu and Kannada film industries. She is best known for her critically acclaimed role as Ananthi in the 2007 Tamil film Katradhu Thamizh, which happened to be her first Tamil film and introduced her to the Tamil audience as an actress.

Anjali was born in Rajamundry in Andhra Pradesh, India, and has 2 brothers.

She started her acting career in 2007 with the critically acclaimed Tamil film Katradhu Thamizh, directed by Ram, who gave her the opportunity to star in the film, when she was vainly waiting for an offer in the Telugu film industry.

Though the film proved to be unsuccessful at the box office, people took notice of "Ananthi", the homely girl, which Anjali portrayed in the film and she garnered critical acclaim, was highly praised and was also nominated for the Filmfare Award for the Best Debut Actress in Tamil for that year.

In her second film, Aayudham Seivom opposite director-turned-actor Sundar C., she went for an image makeover, shedding her "homely image" and enacting a glamorous role with less scope to perform, which was not well received by the audience, as it was a surprise and shock as opposed to her first film, in which she gave an impressive performance.

She worked on five films simultaneously, including Angaadi Theru, directed by Vasanthabalan, who had earlier directed the National Award winning Tamil film, Veyyil, and Rettai Suzhi, in which she shared screen space with veteran directors Bharathiraja and K. Balachandar.