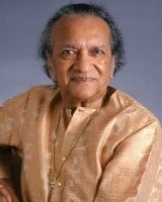 Ravi Shankar, often referred to by the title Pandit, is an Indian classical musician and composer who plays the sitar. He was described as "the most famous Indian musician on the planet" by Ken Hunt of Allmusic.

Shankar was born in Varanasi and spent his youth touring Europe and India with the dance group of his brother Uday Shankar. He gave up dancing in 1938 to study sitar playing under court musician Allauddin Khan.

After finishing his studies in 1944, Shankar worked as a composer, creating the music for the Apu Trilogy by Satyajit Ray, and was music director of All India Radio, Delhi, from 1949 to 1956.

In 1956, he began to tour Europe and America playing Indian classical music and increased its popularity there in the 1960s through teaching, performance, and his association with violinist Yehudi Menuhin and George Harrison of The Beatles.

Shankar engaged himself in western music by writing concerti for sitar and orchestra and toured the world in the 1970s and 1980s. From 1986 to 1992 he served as a nominated member of the upper chamber of the Parliament of India.

Shankar was awarded India's highest civilian honor, the Bharat Ratna, in 1999, and he received three Grammy Awards. He continued to perform in the 2000s, often with his daughter Anoushka.

Shankar was born on 7 April 1920 in Varanasi in a wealthy and conservative Brahmin family of cultured Bengalis. Shankar's Bengali birth name was Robindro Shaunkor Chowdhury. His father, Shyam Shankar, an administrator for the Maharaja of Jhalawar, used the Sanskrit spelling of the family name and removed its last part.

Shyam was married to Shankar's mother Hemangini Devi, but later worked as a lawyer in London, where he married a second time while Devi raised Shankar in Varanasi and did not meet his son until he was eight years old.

Shankar shortened the Sanskrit version of his first name, Ravindra, to Ravi, for "sun". He was the youngest of eight brothers, of whom five lived when he was born.

At the age of ten, Shankar went to Paris with the dance group of his brother, choreographer Uday Shankar, and by the age of 13 he had become a member of the group, accompanied its members on tour and learned to dance and play Indian instruments.

Shankar heard the lead musician for the Maihar court, Allauddin Khan, in December 1934 at a music conference in Kolkata and Uday convinced the Maharaja of Maihar in 1935 to allow Khan to become his group's soloist for a tour of Europe.

Shankar was sporadically trained by Khan on tour, and Khan offered Shankar training to become a serious musician under the condition that he abandoned touring and came to Maihar.

Training And Work In India

Shankar's parents had died by the time he returned from the European tour, and touring the West had become difficult due to political conflicts that would lead to World War II. Shankar gave up his dancing career in 1938 to go to Maihar and study Indian classical music as Khan's pupil.

Khan was a rigorous teacher and Shankar had technical training, learned ragas and often studied with Khan's children Ali Akbar Khan and Annapurna Devi. Shankar began to perform publicly on sitar in December 1939 in a jugalbandi (duet) with Ali Akbar Khan on sarod. He continued training in dhrupad, khyal, and rhythm under Allauddin Khan.

Shankar completed his training in 1944. Following his training, he moved to Mumbai and joined the Indian People's Theatre Association, for whom he composed music for ballets in 1945 and 1946. Shankar recomposed the music for the popular song Sare Jahan Se Achcha at the age of 25.

He began to record music for HMV India and worked as a music director for All India Radio (AIR), New Delhi, from February 1949 to January 1956. Shankar composed for the Indian National Orchestra and his compositions experimented with a combination of Western instruments and classical Indian instrumentation. He composed the music for the Apu Trilogy by Satyajit Ray, which became internationally known, beginning in the mid-1950s.

V. K. Narayana Menon, director of AIR Delhi, introduced the western violinist Yehudi Menuhin to Shankar during Menuhin's first visit to India in 1952. Shankar had performed as part of a cultural delegation in the Soviet Union in 1954 and Menuhin invited Shankar in 1955 to perform in New York City for a demonstration of Indian classical music, sponsored by the Ford Foundation. Shankar declined to attend due to problems in his marriage, but recommended Ali Akbar Khan to play instead.

Ali Akbar Khan reluctantly accepted and performed with tabla player Chatur Lal in the Museum of Modern Art, and he later became the first Indian classical musician to perform on American television and record a full raga performance for Angel Records.

Shankar heard about the positive response Khan received and resigned from AIR in 1956 to tour the United Kingdom, Germany, and the United States. He played for smaller audiences and educated them about Indian music, incorporating ragas from the South Indian Carnatic music in his performances, and recorded his first LP album Three Ragas in London, released in 1956.

In 1958, Shankar participated in the celebrations of the tenth anniversary of the United Nations and UNESCO music festival in Paris. Since 1961, he toured Europe, the United States, and Australia, and became the first Indian to compose music for non-Indian films. Chatur Lal accompanied Shankar on tabla until 1962, when Alla Rakha assumed the role.

Shankar befriended Richard Bock, founder of World Pacific Records, on his first American tour and recorded most of his albums in the 1950s and 1960s for Bock's label. The Byrds recorded at the same studio and heard Shankar's music, which lead them to incorporate some of its elements in theirs, introducing the genre to their friend George Harrison of The Beatles.

Harrison became interested in Indian classical music, bought a sitar and used it to record the song "Norwegian Wood (This Bird Has Flown)". This led to Indian music being used by other musicians and created the raga rock trend. Harrison met Shankar in London in 1966 and visited India for six weeks to study sitar under Shankar in Srinagar.

During the visit, a documentary film about Shankar named Raga was shot by Howard Worth, and released in 1971. Shankar's association with Harrison greatly increased Shankar's popularity and Ken Hunt of Allmusic stated Shankar had become "the most famous Indian musician on the planet" in 1966. In 1967, he performed at the Monterey Pop Festival and won a Grammy Award for Best Chamber Music Performance for West Meets East, a collaboration with Yehudi Menuhin.

The same year, the Beatles won the Grammy Award for Album of the Year for Sgt. Pepper's Lonely Hearts Club Band which included "Within You Without You" by Harrison, a song that was influenced by Indian classical music.

Shankar opened the Kinnara School of Music in Los Angeles, California, in May 1967, and published a best-selling autobiography, My Music, My Life, in 1969. Shankar performed at the Woodstock Festival in August 1969, and found he disliked the venue. In the 1970s he distanced himself from the hippie movement.

In October 1970, Shankar became chair of the department of Indian music of the California Institute of the Arts after previously teaching at the City College of New York, the University of California, Los Angeles, and being guest lecturer at other colleges and universities, including the Ali Akbar College of Music.

In late 1970, the London Symphony Orchestra invited Shankar to compose a concerto with sitar; Concerto for Sitar and Orchestra was performed with André Previn as conductor and Shankar playing the sitar.

During the 1970s, Shankar and Harrison worked together again, recording Shankar Family and Friends in 1974 and touring North America to a mixed response after Shankar had toured Europe.

The touring band visited the White House on invitation of John Gardner Ford, son of U.S. President Gerald Ford. The demanding North America tour weakened Shankar, and he suffered a heart attack in Chicago in September 1974, causing him to cancel a portion of the tour. In his absence, Shankar's sister-in-law, singer Lakshmi Shankar, conducted the touring orchestra.

Shankar toured and taught the remainder of the 1970s and the 1980s and released his second concerto, Raga Mala, conducted by Zubin Mehta, in 1981. Shankar got nominated for an Academy Award for Best Original Music Score for his work on the 1982 movie Gandhi, but lost to John Williams' E.T. He served as a member of the Rajya Sabha, the upper chamber of the Parliament of India, from 1986 to 1992, after being nominated by Rajiv Gandhi.

Shankar underwent an angioplasty in 1992 due to heart problems, after which George Harrison involved himself in several of Shankar's projects. Because of the positive response to Shankar's 1996 career compilation In Celebration, Shankar wrote a second autobiography, Raga Mala, with Harrison as editor.

In the 2000s, he won a Grammy Award for Best World Music Album for Full Circle: Carnegie Hall 2000 and toured with his daughter, sitar player Anoushka Shankar, who released a book about her father, Bapi: Love of My Life, in 2002. Anoushka performed a composition by Shankar for the 2002 Harrison memorial Concert for George and Shankar wrote a third concerto for sitar and orchestra for Anoushka and the Orpheus Chamber Orchestra. He played his last European concert in June 2008.

Shankar was awarded the Sangeet Natak Akademi Award, the highest Indian recognition given to practicing artists, in 1962, and became a fellow of the academy in 1975. He was awarded the three highest national civil honors of India: Padma Bhushan in 1967, Padma Vibhushan in 1981, and Bharat Ratna in 1999.

Shankar received the music award of the UNESCO International Music Council in 1975, three Grammy Awards, and was nominated for an Academy Award. He was awarded honorary degrees from universities in India and the United States. Shankar received the Fukuoka Asian Culture Prize in 1991, the Ramon Magsaysay Award in 1992, and the Polar Music Prize in 1998.

Shankar married Allauddin Khan's daughter Annapurna Devi in 1941 and had a son, Shubhendra Shankar, who was born in 1942. Shankar separated from her in the 1940s and had a relationship with Kamala Shastri, a dancer, since the late 1940s. An affair with Sue Jones, a New York concert producer, led to the birth of Norah Jones in 1979.

In 1981, Anoushka Shankar was born to Shankar and Sukanya Rajan, who Shankar had known since the 1970s. After separating from Kamala Shastri in 1981 Shankar lived with Sue Jones until 1986 and married Sukanya Rajan in 1989. Shankar is a Hindu. He lives with Sukanya in Southern California.

Shubhendra "Shubho" Shankar often accompanied his father on his tours. He could play the sitar and surbahar, but chose not to pursue a solo career. Shubhendra died in 1992.