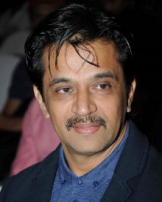 Arjun Sarja  is an Indian actor and director of Kannada films. Arjun was born to Mr. J.C.Ramaswamy (Shakti Prasad) a renowned and popular actor of Kannada films. His father-in-law Rajesh is also a senior actor in Kannada movies and his younger brother Kishor Sarja is also a director.
He has now acted over 200 films in three different language including Tamil, Telugu and Kannada. His wife Asha Rani is also an actress who has acted in a Kannada movie called "Rathasapthami" with Shivaraj Kumar. Arjun has one daughter, Aishwarya.

Film Career
Arjun started his first venture as a film actor in Kannada with director Rajender Singh Babu. He then moved to Tamil and Telugu and concentrated there. His first Tamil film was Nanri. His popular movies in Tamil include Gentleman, Otran, Giri, Jayasurya, Jai Hind, Ezhumalai and Mudhalvan.
In Telugu he is popularly known for his movie 'Hanuman Junction' which was later dubbed into Tamil. Arjun has also directed and produced some films. Arjun has won the Filmfare Best Actor Award South and Tamil Nadu State Award for Best Actor in the film Gentleman.
#MeToo Controversy

Sruthi Hariharan accused Arjun of sexual misconduct and claimed that he had touched her without her permission while shooting for Nibunan. She had also stated that the star's intentions were 'anything but professional'. This revelation also indicated that the #MeToo campaign had hit South Indian Industry.