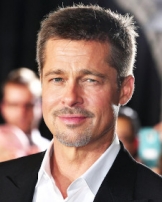 William Bradley Aka Brad Pitt is an American actor and film producer, who first achieved stardom in several successful films in the mid-1990s. He has been cited as one of the world's most attractive men and his off-screen life is widely reported. Pitt has received two Academy Award nominations and won one Golden Globe Award out of four nominations.

Pitt began his career in television guest spots, including a recurring role on the CBS soap opera Dallas in 1987. He was cast in supporting roles in such standard teen-oriented films, slasher flicks, comedies and family-oriented sports dramas. He gained recognition as the cowboy hitchhiker who seduces Geena Davis' character in the 1991 film Thelma & Louise. Pitt's first leading role in a major film was in Interview with the Vampire (1994). He starred in the 1995 well-received crime and science fiction films Se7en and Twelve Monkeys, for which he won a Golden Globe for Best Performance by an Actor. Pitt achieved fame as a result of his portrayal of Tyler Durden, a straight-shooting but charismatic mastermind individual in Fight Club (1999) and as Rusty Ryan in Ocean's Eleven (2001) and its sequels Ocean's Twelve (2004) and Ocean's Thirteen (2007). He has had his biggest commercial successes with Spy Game (2001), Troy (2004), the action-comedy Mr. & Mrs. Smith (2005), and Burn After Reading (2008).

Following a high profile relationship with actress Gwyneth Paltrow, and marriage to Jennifer Aniston, as of 2008, Pitt lives with actress Angelina Jolie, in a relationship that has attracted worldwide media attention. He and Jolie have three adopted children, Maddox, Pax, and Zahara, as well as three biological children, Shiloh, Knox, and Vivienne. Since his relationship with Jolie, Pitt has become increasingly involved in social issues, both in the United States and internationally.

Brad Pitt was born in Oklahoma and raised in Springfield, Missouri. His mother's name is Jane Etta Hillhouse. His father, William (Bill) Pitt, worked in management at a trucking firm in Springfield. He has a younger brother, Douglas (Doug) Pitt and a younger sister Julie Neal Pitt. At Kickapoo High School, Pitt was involved in sports, debating, student government and school musicals. Pitt attended the University of Missouri, where he majored in journalism with a focus on advertising. He occasionally acted in fraternity shows. He left college two credits short of graduating to move to California. Before he became successful at acting, Pitt supported himself by driving strippers in limos, moving refrigerators and dressing as a giant chicken while working for "el Pollo Loco."

Posed for a campus calendar in college.

A girl went to Pitt's Hollywood-area home shortly after midnight Jan. 7, 1999 and crawled in through an open window, dressed herself in his clothes and stayed for 10 hours before the alarm went off. Athena Rolando, 19, was ordered not to contact the actor and to stay 100 yards away from him for three years. [1999]

Chosen by "People" magazine as one of the 50 most beautiful people in the world. [1997]

Donated $100,000 to the Discovery Center - a children's learning museum in his hometown of Springfield, Missouri. [June 1996]

Chosen by People (USA) magazine as one of the 50 most beautiful people in the world. [1996]

His first starring role in a feature film was in The Dark Side of the Sun (1997), shot in pre-war Yugoslavia during the summer of 1988. As editing neared completion, civil war broke out in the region and much of the footage was lost. In 1996, after a five-year search, all of the lost footage was found and returned to producer Andjelo Arandjelovic, who is working on getting a distribution deal. Pitt was paid $1,523 per week for seven weeks. He played a young American taken by his family to the Adriatic Sea to search for a cure for a rare skin disease.

Purchased a mansion is Southern California from the actress who portrays "Elvira" (Cassandra Peterson). He reportedly paid $1.7 million for the house. This mansion is filled with antiques and has a "vampirish" look to it. [1996]

1994: Given title "Sexiest Man Alive" from People Magazine, after making Legends of the Fall (1994).

May 1992: Lived in Southern California with friend Buck Simmonds, who starred with him in A River Runs Through It (1992).

Had to learn to fly-cast for his role in A River Runs Through It (1992). He practiced on top of buildings in Hollywood. During these practices he frequently hooked himself in the back of his head.

Was a journalism major in college with an advertising focus.

Dropped out of the University of Missouri School of Journalism (Columbia, Missouri).

In high school was a member of the golf, tennis, and swim teams.

Belonged to the Key Club and the Forensics Club in High School.

Has his teeth capped.

Sued Damiani International, the company which created the wedding ring he gave Jennifer Aniston. According to Pitt, the ring was his design and was to be exclusive. The company has since been selling replicas and indicating Pitt/Aniston's endorsement of the ring. [18 July 2001]

He and ex-wife Jennifer Aniston spent $1 million on their wedding. [2000]

He and ex-wife Jennifer Aniston reached a settlement with Damiani International. The pair claimed the company agreed to never reproduce their wedding rings, but it manufactured and sold "Brad and Jennifer" rings in 18 karat white or yellow gold, featuring either 12 or 13 diamonds and costing about $1,000 apiece. Under the settlement, Pitt will now design jewelry for Damiani that Aniston will model in ads, and Damiani will stop selling the Pitt and Aniston copies. [January 2002]

For the last couple of years he has been the spokesman for Edwin Jeans ads in Japan. In 2001 he was also the face of the ads for a new Japanese canned coffee which is named Roots. Was replaced in these tv ads (2002) by Kevin Costner.

Did TV commercial for Toyota (Altis model) that aired only in Asia. The car became very popular and its sales resulted in Toyota getting an almost 32% share of the passenger car market.

Has a home at Lake Mohawk in Sparta, New Jersey.

Auditioned for the role of "J.D." in the 1988 cult classic film Heathers (1988) and, though he showed talent, casting directors thought him to be "too sweet" for the role, which later went to Christian Slater. He would later go on to a very similar role in the horror film Cutting Class (1989) in 1989.

Is mentioned by name in the Shania Twain hit song, "That Don't Impress Me Much."

He is a member of the Sigma Chi Fraternity. The Xi Xi chapter at The University of Missouri - Columbia.

After watching Lock, Stock and Two Smoking Barrels (1998), Pitt asked director Guy Ritchie if he could be in his next film. He couldn't master the English accent, so Ritchie gave him the role of Mickey the One Punch Pikey, an Irish fighter, in Snatch. (2000).

With Brad Grey's departure for Paramount and after the divorce settlement with ex-wife Jennifer Aniston, he now solely owns Plan B Entertainment.

He and ex-wife Jennifer Aniston campaigned in the United States to save "EastEnders" (1985) from being axed there [2003].

Showed his parents the "Chemical Burn" scene to convince them not to watch Fight Club (1999).

Got into better shape and eventually gained over 20 pounds of muscle for Troy (2004).

His high school nickname was Brad the "Pitt-bull."

He took Greek language lessons in secret to surprise his ex-wife Jennifer Aniston who is of Greek ancestry.

Announced on January 7, 2005 that he and Jennifer Aniston are separating after 4 1/2 years of marriage.

Was listed as a potential nominee on the 2005 Razzie Award nominating ballot. He was listed as a suggestion in the Worst Actor category for his performance in the film Troy (2004). He did not receive a nomination, however.

Dianne Wiest is his favorite actress.

Premiere Magazine ranked him as #50 on a list of the Greatest Movie Stars of All Time in their Stars in Our Constellation feature (2005).

A short while after completing A River Runs Through It (1992), he fled to Amsterdam where he briefly lived for three months by himself in a small basement apartment before returning to the USA to film Kalifornia (1993).

He and his ex-wife Jennifer Aniston met on a blind date, which was arranged by their agent

In 2001 renowned architect Frank O. Gehry renovated the wine cellar in the home in which Pitt and wife Jennifer Aniston lived. Pitt subsequently did an informal apprenticeship in Gehry's Los Angeles office.

Owns the rights to the Hong Kong thriller Mou gaan dou (2002). He wanted it to be remade with he and Tom Cruise in the leading roles.

Visited over 100 orphans affected by HIV at a facility run by The Salvation Army in South Africa.

Is a member of the Sigma Chi fraternity.

Without being asked to, he made an appearance on MTV's "Jackass" (2000) where he did stunts with the cast, dressed in an ape outfit.

Raised in Springfield, Missouri, and is an alumni of Kickapoo High School. Other alumni include Adrienne Wilkinson and Jay Kenneth Johnson.

Broke his arm during the filming of Se7en (1995). The injury was written into the movie.

Wanted to play Darcy in Bride & Prejudice (2004), but wasn't able to work out the filming dates.

Daughter (with girlfriend Angelina Jolie) Shiloh Jolie-Pitt was born 27 May 2006 in Namibia, Africa.

Was considered for two roles which went to Johnny Depp: Ichabod Crane in Sleepy Hollow (1999) and Willy Wonka in Charlie and the Chocolate Factory (2005). Both were directed by Tim Burton.

Occasionally flies a Cessna 208B Caravan belonging to Chivan Productions.

Initially didn't want to appear in Mr. & Mrs. Smith (2005), although it was he who gave the script to director Doug Liman.

Originally cast as Colin Sullivan in The Departed (2006), but later dropped out. He continued to produce the film under his (and his then wife Jennifer Aniston's) production company, Plan B.

His first job was dancing in a chicken suit to draw in customers at an El Pollo Loco restaurant on Sunset Blvd. in Hollywood.

Made a cameo appearance with Matt Damon for free in Confessions of a Dangerous Mind (2002) as a favor to Ocean's Eleven (2001) costar and close friend George Clooney - the film was Clooney's directorial debut.

Considered for the role in Crimson Tide (1995) that eventually went to 'Denzel Washington'.

Mentioned in the song High School Never Ends by Bowling for Soup, as "the quarterback".

He and Russell Crowe were director Ridley Scott's first two choices for the lead in American Gangster (2007). Crowe was eventually cast.

Used to act at the Vandevort Theater in Springfield, Missouri. He still visits and donates to the theater.

Donated 5 million dollars of his own money to rebuild homes in Katrina-ravaged New Orleans.

In 2007, Forbes Magazine estimated his earnings for the year to be $35 million.

He is a Patron of the Mineseeker Foundation and the Sole of Africa, a campaign dedicated to detecting and removing land mines in Africa. The Foundation's patrons include Nelson Mandela, Sir Richard Branson, Queen Noor, Graca Machel and John Paul de Joria.

In Nov. 2005 he visited Pakistan with Angelina Jolie to see the impact of the 2005 Kashmir earthquake. In 2006, Jolie and Pitt also went to Haiti where they visited a school supported by Yéle Haïti, a charity founded by Haitian-born hip hop musician Wyclef Jean.