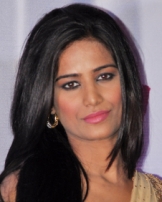 Poonam Pandey is an Indian model and bollywood film actress, born in Bihar, brought up in Mumbai, India. She attended college until class 12th, and ventured into modeling.

She became one of the Top eight contestants of Gladrags 2010, and appeared on the cover page of the fashion magazine. She has shot for 29 calendars for the year 2011, including the most-awaited Gladrags Calendar.

She is featured in Kingfisher Calendar 2012. She was featured as the "Most downloaded model on the internet”.