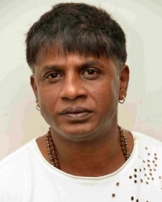 Duniya Vijay is a Kannada film star. popularly known as Duniya Vijay, Kari Chirathe, and Black Cobra. Vijay struggled a lot before becoming popular on screen. He started off as a junior film artist in the industry, playing small, insignificant roles. Vijay is happily married and has three children. His nephew, Yogesh, is also a popular Kannada hero.

Vijay, with his great acting in the movie, won the best actor award from the Karnataka state government. Continuing on the success of Duniya, his next movie, "Yuga," was a delight for all his fans, and he took Kannada movies to new heights with his daredevil stunts. If "Yuga" was appreciated for its stunts, then his next movie, "Chanda," took the Kannada movie scene by storm, and this movie proved to the world that Vijay is not just great with stunts but equally at ease with acting.

Though this movie created a lot of controversies, the people of Karnataka and especially Vijay fans stood up to support their beloved star. His next movie, "Avva," directed by Kavitha Lankesh, was meant for a mature audience. It won him a lot of accolades for his acting skills, and critics just loved his performance. His movie "Jungle" with Aindrita Ray was a big hit as well. Rajinikanth was impressed with Vijay's acting, and he saw the movie twice in Bangalore. He expressed his desire to meet Vijay, who is one of Rajnikanth's greatest fans, and he met him at his residence in Chennai. Both share the same "rags-to-riches" and "superstardom" stories.