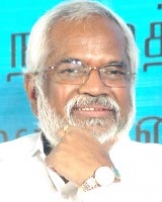 Gangai Amaran is a famous Music Director, prolific Lyricist, Screenplay writer, Actor and Film Director the in film industry of Tamil and he is the brother of noted music director Ilayaraaja. He became popular through the movie Vazhvey Maayam, Karagattakaran, etc.

He has two sons named Venkat Prabhu who is an actor and singer-turned-director with the super-hit film Chennai 600028 and Prem G who is also multi-talented as actor, singer and now even Music Director. He hosted a music competition, Reliance Launch pad in SS Music along with young compère, Medha. He is a very good singer too. He worked as a guitarist for renowned Music Director Sri Dakshinamurthy Swamigal in Malayalam in their initial times.