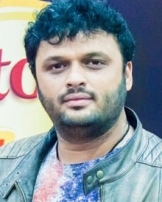 Imran Sardhariya is an Indian choreographer lives in Bangalore. He is the Son of Late Haji Ayub and is known for his works predominantly in Kannada and Telugu films.

He is a well known Choreography in the Kannada Industry. His Life in the Industry for the past 10 years has a credit of success more than 250 songs and briefly 100 movies. In addition, he has worked on 2 Telugu Movies Josh and Chalaaki. He was trained for 5 years by Mr.Jai Borade who is a National Award winner for Best choreography in Hum Aapke Hain Koun. Imran Sardhariya has worked for 2 years as Assistant choreographer for Mr. Ganesh Hegde. He has a Dance School in Bangalore known as Dinky’s Dance and Music Academy.