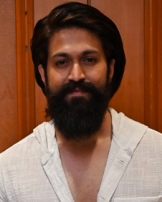 Yash is an Indian film actor who primarily works in the Kannada film industry. He gained notoriety for playing Rocky Bhai in the film KGF. For his outstanding performance, he was honoured with numerous awards, including the Filmfare Awards South, the IIFA Utsavam, and the SIIMA Awards.

Yash was born on January 8, 1986, to Pushpa and Arun Kumar (a bus driver for the KSRTC). He asked his parents about his interest in acting after finishing his tenth-grade studies, but they were never supportive. He continued his studies for their sake. Radhika Pandit and he were married on December 9, 2016. Following several years of dating, the couple wed on December 9, 2016.

Yash made his film debut in 2007 with Jambada Hudugi, playing a supporting role in the film. In his second film, Moggina Manasu, he played the male lead opposite Radhika Pandit. The film emerged as a commercial success and earned him the Filmfare Award for Best Supporting Actor.

Yash went on to star in many commercially successful films such as Modalasala, Rajadhani, Kirataka, Lucky, Jaanu, Drama, Googly, Raja Huli, Gajakesari, Mr. and Mrs. Ramachari, Masterpiece, etc. With a successful track record of hits, Yash has established himself as one of the bankable stars in the Kannada film industry.

Yash started his acting career with the teleserial Nanda Gokula, directed by Ashok Kashyap, which aired on ETV Kannada. He went on to appear in several other teleserials, such as Malebillu and Preeti Illada Mele. His performance in Preeti Illada Mele was much appreciated.

Yash stepped onto the Kannada silver screen with a small role in the Priya Hassan-directed film, Jambhada Hudugi, in 2007, which went unnoticed by a large section of the audience. He then appeared in Shashank's 2008 film Moggina Manasu, opposite his Nanda Gokula co-star Radhika Pandit.

It was not a full-fledged role; however, the role brought him much recognition. He won the Filmfare Award for Best Supporting Actor for his performance in the film. Yash then starred in lead roles in critically acclaimed films like Rocky (2008), Kallara Santhe (2009), Gokula (2009), etc.

In 2010, Yash starred in Modalasala, which became his first commercial solo hit. Yash's performance in the lover-boy role was well received. Despite the film's poor box-office performance, he directed Rajadhani in 2011. The film received positive reviews, and Yash's performance was praised critically.

The same year, his next film, Kirataka, was a huge success and turned out to be his first commercial super hit. Yash received positive reviews for his performance in the village comedy film. The film made Yash popular among the masses. In 2012, Yash had two major releases, Lucky (opposite Ramya) and Jaanu, both of which were much anticipated but met with a mixed response upon release and became average grossers at the box office.

His next film of the same year, the romantic comedy Drama, directed by Yograj Bhat, was released with a grand opening and was a major commercial success. The film was declared a blockbuster and one of the major grossers of 2012. The film elevated Yash to star status and established a loyal youth fan following for the actor, including many female fans.

His next movie, Googly opposite Kriti Kharbanda and directed by Pawan Wadeyar, was released on July 19, 2013. The film recorded a huge opening and emerged as a blockbuster at the box office. The film's opening and success proved that Yash has a huge fan base among youngsters and is emerging as the next big star of Sandalwood.

Yash's much-anticipated Raja Huli, directed by Guru Deshpande with music direction by Nadabrahma Hamsalekha, was released on November 1, 2013, on Kannada Rajyothsava Day. A remake of Sasikumar's Tamil movie Sundarapandian, the movie went on to become a big hit, mainly due to the Mandya-Kannada slang being used to perfection in the movie. Raja Huli is along the lines of his earlier hit, Kirataka.

Gajakesari was the most anticipated film by moviegoers, whether it was shown on a single screen or in a multiplex, because the lead actor, Yash, is the most happening star in Sandalwood. By releasing the movie on more than 180 screens, Gajakesari did wonderful business, breaking all the previous records of early Kannada movies. The film grossed approximately Rs. 5.5 crores in its first weekend at the box office.

Yash will also appear in Pawan Wadeyar's Googly 2, which will build on the success of its predecessor, Googly. His movie Masterpiece's first trailer was released on the eve of his birthday, January 8th, 2015. He also signed on for the film KGF, directed by Prashant Neel of Ugramm fame.