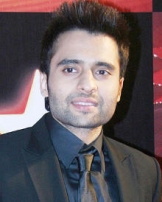 Jackky Bhagnani is an Indian Hindi film actor. He is the son of Bollywood producer Vashu Bhagnani.

Jackky studied in St.Teresa’s High School and use to accompany his father on the sets of many movies. Post schooling, Jackky chose to acquire a Degree in Commerce from H.R. College of Commerce and Economics, Mumbai.

Jackky was the Associate Producer for Out of Control (2003), Shaadi No. 1 (2005) and Silsilay (2005). His first film as actor is Kal Kissne Dekha, scheduled to release in May 2009. In preparation for his debut, he lost 60 kg in less than two years, he was 130 kg, earlier. He worked religiously for his body and put in efforts like a dedicated professional to achieve a lean look. His dance performance at the 54th Filmfare Awards in 2009 was widely appreciated by people from the industry.