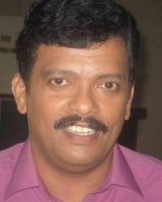 P. V. Jagadish Kumar, popularly known as Jagadish, is a Malayalam film actor and script writer. He became popular through performances in films such as Mukhachitram, In Harihar Nagar, Godfather, and Hitler. A post graduate rank holder, Jagadish's transition from a college lecturer to a film actor was a smooth one.

He was a lead actor in a number of movies in the 1990s, but then mainly got character roles. He has unparalleled flair for comedy most notable in the movie In Harihar Nagar.

Jagadish was born to K. Parameshwaran Nair and P. Bhasurangi Amma on 12 June, 1958, in Chenkal, Neyyattinkara, Thiruvananthapuram, Kerala, India. Jagadish finished his formal education earning Master of Commerce degree with Kerala University. Later, he became a lecturer in a college in Thiruvananthapuram. He had dreams of becoming a film actor, so he took a long leave from his job to try his hand in films.

Jagadish debuted in films with a minor role in My Dear Kuttichathan (1984), which was India's first 3D film. Jagadish became an established actor with his roles in Mutharamkunnu P.O. (1985), Nandi Veendum Varika (1986), Manivatharile Aayiram Sivarathrikal (1987) and Vandanam (1989).

Jagadish proved himself again with a terrific comic timing with his role as Mayeen kutty in Godfather (1991), which also was directed by the same director duo. The scenes from films are still favoured a lot in TV comedy programmes. Post the success of Godfather, he gradually got protagonist roles in the 1990s and managed to make a few hits out of them.

Jagadish has established the image of the comic hero who evokes spontaneous laughter with his own brand of humour. From comedy roles, Jagadish has moved on into important roles that have made him dear to the audience. He is one of the few performers who is compatible both in front of the camera and on the stage in front of the audience. He comes alive on stage with his self-mocking stances and improvised dialogues.

Jagadish is married to Dr. P. Rama, a forensic professor in the Medical College, Thiruvananthapuram. The couple has 2 daughters, Ramya and Soumya.