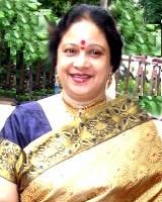 Jayachitra was a star in South Indian films of the 1970s and 1980s, consisting mostly of Tamil and Telugu films.

Childhood
Jayachitra's family is originally from Kakinada, Andhra Pradesh, India. Her father Mahendra was a veterinary doctor, who had earlier worked as a lawyer. Her mother Ammaji (aka Jayasree) was an actress, who had acted in films such as the Tamil film "Mahaveeran" (1955). They moved to Chennai for work, which was where Jayachitra was born and raised as Lakshmi. Her grandmother looked after her, when her parents were busy with work. With her mother's encouragement, she became a child star at the age of 5 in the Telugu film "Bhaktapothana".

Career as heroine
When Jayachitra was in her early teens, she screen-tested for a Telugu film titled "Beedala Paatlu," but the director felt she was too young and rejected her for the role. However, he did recommend her to K.S. Gopalakrishnan, who was looking for a young, spirited heroine, for the Tamil film "Korathi Magan," (1973).

He immediately cast her, because he loved the way she delivered her lines. He signed her for three films under his banner and gave her the name Jayachitra. She continued in heroine roles in "Ponnukku Thanga Manasu" (1973) and played Sivaji's daughter in "Bharat Ratna" and was one of the 9 heroines in MGR's "Navaratnam."

She worked for big-name directors, such as K. Balachander in "Sollathaan Ninaikiren" and Arangetram. She was Kamal Hassan's heroine in the Tamil film Ilamai Oonjal Aadukirathu (1978) and its Telugu remake Vayasu Pilichindi (1978). As an actress, she was known for her courage and spontaneity as she continued to star in Tamil and Telugu films.

She faced a snake up close in "Vellikizhamai Viratham," and then a tiger in a Telugu film. She made other unforgettable films: "Ponnukku Thanga Manasu", "Sathyam", "Kalyanamam Kalyanam", "Vandikaran Magan", Cinema Paithiyam (remake of the Hindi hit film Guddi (1971)). She memorably played the title role in the Telugu film "Kalpana" (1977), a remake of the Hindi hit film Anamika(1973).

Personal life
After more than a decade as a heroine, Jayachitra decided to concentrate on her personal life by getting married to an industrialist named Ganesh in 1983. She has a son with him named Amresh, whom she is trying to promote in show business, just as her mother had done with her.

Career as mature actress
Later, she became a character actress in K. Balachander's film "Pudhu Pudhu Arthangal" (1989).[3] After completing 200 films, she turned to television with the serial "Sumangali," which she produced, directed and acted in. It became a hit, and she was soon acting and producing other serials, "Alaigal," and "Sivaranjini" (2005).

She was unanimously elected chairperson of the action committee of the TV Serial Producers' Guild of South India, which in turn led to her involvement in politics. She joined the Congress party and has remained fairly active. She has won numerous awards, including Tamil Nadu's Kalaimamani Award.