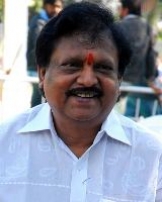 He is one of the famous directors in Indian cinema, he has directed more than 100 movies in Telugu, Tamil and Hindi languages all together. He has been with the Indian cinema industry for more than 30 years. He is good at making movies which are based on the background of village stories, family stories, women-oriented stories, political stories and socio-fantasy stories.

He is a fine director who knows how to integrate special effects well into the movies. Arundhati, Anji and Ammoru are the best examples of his direction and special effects skill.

His first movie Intlo Ramayya Veedhilo Krishnayya film ran for 525 days. No director in the Indian cinema had made these many variety of movies.

Kodi Ramakrishna passed away at AIG Hospital in Gachibowli, Hyderabad on February 22nd 2018. He was hospitalized for breathing treatment.