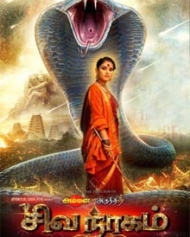 Shivanagam (aka) Sivanagam is a multilingual epic fantasy thriller movie direction by 'Arundhanthi' fame director Kodi Ramakrishna. The film starring Vishnuvardhan, Ramya, Rajesh Vivek Upadhyay and Mukul Dev.
Detailed Story Of Shivangam
Shivangam movie set in the village backdrop, Ramya who is a big personality in her village. She and her forefathers have been saving an ancient monument since many 100's of years.
Rajesh Vivek Upadhayay plays as an evil, he and his forefathers have been fighting with Ramya's family since many years to occupy the Monument.
Finally evil kills Ramya and occupies the monument. While dying she takes an oath that she will come back to take revenge by evil. What happens next is the rest of the story to be watched on big screen.
Shivanagam music composed by Guru Kiran. The film was released in Tamil under the title Shivanagam and Telugu titled as Nagabharanam and in Kannada as Nagarahavu. The visual effects are given by Makuta VFX.