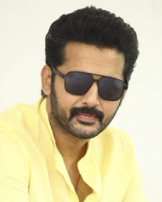 Nitin Reddy is a Tollywood film actor. His father, N. Sudhakar Reddy, is a popular film distributor and producer in the Nizam area. He has acted in hit films like Jayam, Dil, and Sye.

Nitin started his career with the sensational hit Jayam in 2002. In 2003, his career got a bigger boost with the hit film Dil, directed by V.V. Vinayak. Later in 2003, Nitin delivered his first flop, Sambaram.

In 2004, Nitin starred in Sri Anjaneyam, which was another disaster for him and director Krishna Vamsi. He got on track with S.S. Rajamouli's Sye. He attracted audiences with his new, hot look in the film Sye. His mannerisms and acting in the movie were the epitome of a college hottie who was also a jock.

His bad-boy charm and his good-hearted nature made him an instant heartthrob amongst female audiences. The ending of Sye was simply marvelous, and his part, in the end, made him all the more attractive. For his simple charm and sexy looks, most people say "Sye" is Nitin's favourite film.

From 2005 to 2006, all his films (Dhairyam, Allari Bullodu, and Raam) did not stand up to expectations, even though they were directed by experienced filmmakers. His next film was "Victory" with Mamta Mohandas, which failed to do well at the box office, despite Nitin's newly acquired six-pack for this film. He also got to work with his co-star, Sye Shashank, in Victory.