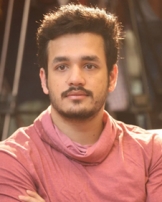 Akhil Akkineni is an Indian film actor who works in the Telugu film industry. The son of actors Nagarjuna and Amala, Akhil made his acting debut as a baby who leaves his home in the comedy film Sisindri (1994), aged one.

After completing his education, Akhil made a return to the film industry as a cricketer in celebrity tournaments and then in a cameo appearance in Vikram Kumar's Manam (2014) alongside several of his family members. He then appeared in his first film in a leading role with Akhil (2015), an action fantasy film.

Akhil was born into a film family on April 8, 1994, in San Jose, California. He is the younger son of Akkineni Nagarjuna and Amala. His elder half-brother, Naga Chaitanya, is also an actor. He is the grandson of actor and film producer Akkineni Nageswara Rao. He is of Telugu descent on his father's side, and on his mother's side, he is of Bengali and Irish descent.

Akhil started his education at Chaitanya Vidyalaya before heading to study in Australia for two years and returning to complete his studies at Oakridge International School, Hyderabad. Akhil revealed that he chose to pursue acting as a career at age 16, thus turning down his father's request for him to study business management and instead enrolling in an acting course at the Lee Strasberg Theatre and Film Institute in New York.

Akhil made his first film appearance by portraying the title role in Shiva Nageswara Rao's Sisindri (1995), a Telugu adaptation of the English comedy film Baby's Day Out (1994). At age one, he completed his work as a baby escaping from home, and the film went on to win positive reviews and perform well at the box office.

Akhil did not appear in any other films as a child actor and continued his education, staying away from the film industry. Akhil re-emerged in 2010 as a cricketer for his father's Nag Kings team in the 2010 edition of the celebrity Tollywood Trophy, which was organised to develop funds for the Movie Artistes' Association.

His match-winning half-century in the final against the Venky Warriors team saw him secure the man-of-the-match and man-of-the-series awards. His performance in the matches saw him called up to play for the Telugu Warriors in the inaugural Celebrity Cricket League in 2011, and he has since regularly participated in the tournament and won the 2015 edition as captain of his team.

As a result of his success in the cricket tournaments, his return as an actor had drawn media curiosity, but Akhil constantly denied reports that he had signed any projects during late 2013. In 2014, Akhil made a cameo appearance during the climax of Vikram Kumar's family drama film Manam (2014), which featured three generations of actors from the Akkineni family.

The film's makers initially hoped to keep Akhil's appearance a secret, but the news was leaked out prior to the film's release. Director Vikram Kumar had proposed the idea of introducing Akhil as an actor through the film and had approached Akhil's father, Nagarjuna, with the idea, who subsequently agreed.

Akhil shot for the film for a few days alongside his grandfather, father, and half-brother. He described the experience as "nervous and exciting" and added that Vikram Kumar helped calm him down during the shoot. Manam went on to become one of the most profitable Telugu films of 2014, while critics dubbed the film a "classic" en route to it winning several awards, including Best Film at the Filmfare Awards.

Akhil subsequently went on to make appearances in commercials, notably featuring in adverts for Karbonn phones, Mountain Dew, and Titan watches with Kalki Koechlin. When the question of his first film as a leading actor came up, Akhil listened to scripts from several directors and was most impressed by V. V.

Vinayak's narration of an action film, which was later titled Akhil (2015) after himself. In order to prepare for the role, Akhil enrolled in a stunt workshop with his personal trainer, Kicha, and attended workshops in Thailand for two months. Produced by actors Nithin and Sudhakar Reddy, the film began production in December 2014 and featured him alongside fellow debutant actress Sayesha Saigal, who was also from a film family.