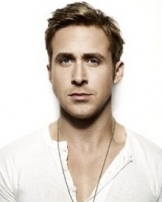 Ryan Thomas Gosling born in November 12, 1980 is a Canadian actor and musician. Gosling began acting at age 12 on the American variety television show The Mickey Mouse Club. At the age of 17, Gosling was cast as Sean in the short lived Canadian television show Breaker High (1997–1998). Following his feature film debut in Remember the Titans (2000), Gosling had his breakout role as a fanatic Neo-Nazi in the 2001 drama film The Believer, for which he received an Independent Spirit Awards nomination for Best Male Lead.

In 2004, Gosling gained mainstream success for playing the male lead in the romantic drama The Notebook. Two years later, Gosling earned his first Academy and Screen Actors Guild Award nomination as Best Leading Actor, for portraying a junior high school teacher in the independent film Half Nelson (2006). The following year he was nominated for another Screen Actors Guild Award and a Golden Globe Award for his lead performance in Lars and the Real Girl (2007). Gosling earned his second Golden Globe nomination for the independent drama Blue Valentine (2010).

Aside from acting, Gosling formed the band Dead Man's Bones with his friend Zach Shields. They released their self-titled debut album in October 2009.

Ryan Gosling was born in Cornwall, Ontario the son of Donna, a secretary, and Thomas Gosling, a paper mill worker. He was raised in the Church of Jesus Christ of Latter-day Saints, and had said that the experience still shapes and affects his character. His parents divorced when he was young. Gosling was taken out of elementary school and homeschooled because of being harassed and picked on in elementary school.

Gosling dropped out of high school at age 17. He then moved to New Zealand, where he worked on the series Young Hercules for two years, with the company that created Xena, Warrior Princess.

Gosling was a cast member on the hit show The Mickey Mouse Club alongside fellow stars; Britney Spears, Christina Aguilera, Justin Timberlake, J.C. Chasez, and Keri Russell. He was part of the last set of new Mouseketeers to be admitted into the show before it ended its run. He sang, danced, and acted on the show.

Gosling was in many Canadian television series/movies including, Are You Afraid of the Dark?, Goosebumps, Road to Avonlea and Nothing Too Good for a Cowboy. He starred in the Canadian television show Breaker High which aired on YTV in Canada and UPN in the United States from 1997 to 1998. Then from 1998-1999 Gosling starred in Young Hercules which was shot on location in New Zealand. The show told the tale of Hercules adventures as a teenager when he learned his warrior skills at a training academy. In 2000, he got his breakout role in Remember the Titans as Alan Bosley, working alongside Denzel Washington.

Gosling won the Best Actor category at the Spirit Awards (formerly known as the Independent Spirit Awards) for his role as a drug-addicted, junior high school history teacher in the 2006 film Half Nelson. For the same role, he was nominated for an Academy Award, a Screen Actors Guild Award, and a Broadcast Film Critics Association award as best actor. Gosling also holds the distinction of being the first former Mickey Mouse Club cast member (of both the original and the revival) to be nominated for an Oscar and the first Canadian actor to be nominated for Best Actor in 62 years, since Alexander Knox (Wilson) in 1944.

On December 13, 2007, Gosling was nominated for a Golden Globe Award for Best Actor - Motion Picture Musical or Comedy for Lars and the Real Girl. A week later, he was subsequently nominated for a Screen Actors Guild Award. He had also received a Broadcast Film Critics Association nomination and won a Satellite Award for this performance as well. In February 2008, he was presented with the inaugural Independent Award at the Santa Barbara Film Festival. In her introduction, presenter Jenelle Riley called him "The most consistent and compelling actor working today."

On December 25, 2008 Dead Man's Bones released a music video and free download for their song "In The Room Where You Sleep," and on April 4, 2009, the band released another music video for their song "Name In Stone" on MySpace and YouTube. The self-titled debut album from the band, featuring members of the Silverlake Conservatory of Music's children's choir, was released on October 6, 2009 through ANTI- records. In 2010, they released two other music videos for tracks; "Dead Hearts" and "Pa Pa Power" Gosling and Shields also toured around North America for fall/Halloween 2009 with a local choir and talent show at every show to rave reviews. Each children choir was similar to the LA group, Silverlake Conservatory Children's Choir, which they recorded with on the album.

Derek Cianfrance's directorial debut was shot in 2009 with Michelle Williams and Ryan Gosling, taking the director 12 years to make. Blue Valentine was premiered at the 2010, Sundance Film Festival as one of 16 films selected from 1,058 submissions for the dramatic competition. Written by Derek Cianfrance, Cami Delavigne and Joey Curtis, the screenplay won the 2006 Chrysler Film Project contest, which came with $1 million of funding. After Cianfrance's world premiere at Sundance, in 2010 Blue Valentine was also screened at Cannes International Film Festival's Un Certain Regard and the film played to the press and public at the Toronto International Film Festival. Following those three festivals, the film has since been screened at various festivals around the world.

In 2010, Ryan Gosling narrated Phillip Montgomery’s ReGeneration, a new documentary that explores the widespread cynicism in today’s youth and young adults, and the influences that perpetuate our culture’s apathetic view towards social and political causes. Gosling also produced the documentary along with Anonymous Content’s Matt DeRoss and Engine 7 Films’ Joel Goulder and Jeremy Goulder. Montgomery said,“It is an honor to work with one of the most talented and intelligent artists of our generation. As a socially conscious individual himself, Ryan brings an inspired freshness to the films core message of hope and action. There is truly no better voice to guide us through this film.”

Ryan Gosling will be co-starring in Crazy, Stupid, Love with Steve Carell, Kevin Bacon, Emma Stone, Marisa Tomei, Analeigh Tipton and Josh Groban. The film is being distributed by Warner Brothers and is set for theatrical release in July, 2011.

In September 2010, Gosling began filming on the independent feature, Drive, by Danish director Nicolas Winding Refn. The film co-stars Carey Mulligan, Bryan Cranston, and Ron Perlman. FilmDistrict picked up distribution rights and will release it on September 16, 2011. Gosling is also scheduled to star in the George Clooney-directed film version of Beau Willimon's award-winning play, Farragut North, now known as The Ides of March.

Gosling divides his time between Toronto and Los Angeles.

He dated actress Rachel McAdams, whom he met during the filming of The Notebook, from 2004 to February 2007. The relationship was extremely popular in both the media and amongst fans, even being mentioned in the popular Saturday Night Live sketch "Lazy Sunday". He has stated that he has encountered many fans who took the news of their breakup as hard as he and McAdams did and would be forced to console them. Of the relationship, Gosling said the following to GQ Magazine in 2007: "I mean, God bless The Notebook... It introduced me to one of the great loves of my life. But people do Rachel and me a disservice by assuming we were anything like the people in that movie. Rachel and my love story is a hell of a lot more romantic than that." Of their actual breakup, Gosling has also remarked, "The only thing I remember is we both went down swingin' and we called it a draw."

Gosling is one of GQ Magazine's 2010 Men of the Year, as "Contender of the Year"