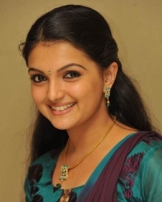 Saranya Mohan is a young actress of Tamil movies. She made her debut in the film Oru Naal Oru Kanavu, in which she acted as a sister of Srikanth (Cheenu).

Her next performance was in the movie Yaaradi Nee Mohini, and her character as Pooja provided comedy essence to the movie.

Saranya Mohan, who was discovered by director Fazil in Malayalam cinema, appears as Nayantara's sister with a crush on the hero in Dhanush-starrer Yaaradi Nee Mohini. She has also appeared in many Tamil movies like Vennila Kabaddi Kuzhu, Panchamritam and Eerum.

After Oru Naal Oru Kanavu, Saranya took a break in her acting career to concentrate on her studies. "I was studying at the time I was a child artiste. Now I am doing my final year in Literature so can afford to restart my career," she said.

Vennila Kabaddi Kuzhu, directed by Susindran, is about a kabaddi team and Saranya is the heroine in this sports film. "My character is very important in the story. I play a village girl with more expressions than dialogues. Vennila Kabaddi Kuzhu has an excellent team and a strong script. I want to play good characters. Acting is more important than glamour," she said.