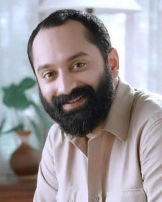 Fahadh Faasil is an Indian film actor known for his work in Malayalam cinema. He made his debut in his father Fazil's Kaiyethum Doorath (2002), which turned out to be a commercial disaster in the Kerala box-office. After a sabbatical of six years, Fahadh returned to cinema with the anthology film Kerala Cafe (2009).

Fahadh was born in 1983 as the son of popular Malayalam film director Fazil, and Rozina. He has two sisters, Ahameda and Fathima, and a brother, Ismail. He completed his schooling from SDV Central School Alleppey, Lawrence School Ooty and Choice School Thripunithara. Later he went on to pursue his degree from Sanatana Dharma College Alleppey and M.A. in Philosophy from Miami University.

On 20 January 2014, it was announced on his Facebook page that he got engaged to Malayalam actress Nazriya Nazim. The engagement took place on February 8, and the two got married on August 21.