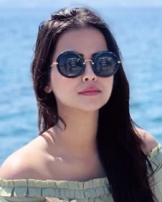 Sharmila Mandre is an Indian actress who mainly appeared in Kannada films. She started her film career through the Kannada film Sajni, opposite Dhyan.

Sharmila's family has a good number of distributors and producers, so she has been exposed to the world of films right from her childhood and it has been her ambition to imprint her name in the film world. Though Sharmila had every reason and adequate support to enter films, she chose to equip herself with the right skills before she followed her childhood dream of acting.

She completed an acting course in London and was a successful model before she ventured into films. This helped her to overcome her initial nervousness of facing the camera.

Sharmila's introduction was through the Kannada film Sajni produced by her sister under the banner of Mandre production house. Sajni is an adequate proof of her talent, has shaped her film image, and brought her more offers and many fans.