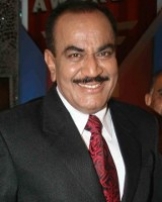 Shivaji Satam is an Indian television and film actor. A former bank official, he has appeared in many Hindi and Marathi films.

He has appeared in many Hindi as well as Marathi Flims. In Hindi his famous flims are Vaastav, Ghulam-E-Mustafa, Yeshwant, China Gate, Taxi No 9211, Jis Desh Me Ganga Reheta Hai, and Hu Tu Tu.

In Marathi he has got recognition through movies like Uttranyan. But what made him popular was his role as "ACP Pradyuman" in the serial C.I.D. on Sony Entertainment Television.