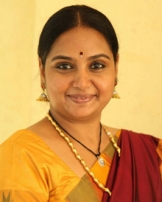 Shruti is a South Indian film actress. She has acted in about 120 Kannada language movies and in several movies in other South Indian languages such as Tamil, Telugu and Malayalam.

Born in a Kannada-speaking family in Karnataka, Shruti's birth name is Priyadarshani. The name Shruti was given to her by the director Dwarakish during her first movie, as a heroine, Shruti.

Shruthi was in Puttur in her early ages of life. Shruti started her cinema career as a side actress and acted in the Kannada movie Aasegobba Meesegobba as the hero Shivarajkumar's sister. Later in the year 1990, she acted as heroine in the movie Shruti directed and produced by Dwarakish. This movie was a successful one running over 25 weeks. Some of the most famous and successful Kannada movies from Shruti are Shruti, Taayi illada tavaru, Veerappa Naayka, Gowri Ganesha, Bombat Hendthi (Karnataka State award Winner), Muddina Maava, Midida Hrudayagalu, etc.

She was married to Mahendar and now divorced.

In 2016, by public vote, Shruti won the third season of the reality show Kannada Bigg Boss.