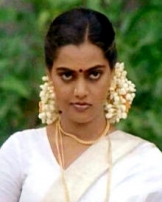 Silk Smitha was a South Indian cinema actress. Even though Smitha appeared in some character roles, she became popular through her glamorous appearances in softcore films.

Biography
Born as Vijayalakshimi into a poor family in Eluru (in Andhra Pradesh), she left school after the fourth standard, determined to become a film star. Moving in with her aunt in Madras (then the centre of the South Indian film industry), she soon found a sponsor who renamed her Smitha.

After garnering much notice and acclaim with her first major role, in the Tamil movie Vandi Chakkaram (The Wheel), in 1979, Smitha assumed the name "Silk," after her character's name in the movie.

The vast majority of her movies are softcore and a common theme is her playing a freakishly strong agent in skimpy bikinis beating up huge thugs. Even in the rare non-sexual roles, she impressed critics and audiences, such as her role of a wife hurt by her husband's infidelity in Alaigal Oivathillai (1981). One of her films, Layanam, has earned a cult status in the Indian adult film industry, and was remade as Reshma ki Jawani. Her most respected film is Moondram Pirai, remade as Sadma.

Death
In 1996 Sep 23rd, Smitha was found dead in her Chennai apartment. In the previous year she had tried to shift career in order to become a film producer. Financial problems, a disillusionment in love and an alcohol dependency apparently led to depression. It is suspected that Smitha committed suicide.