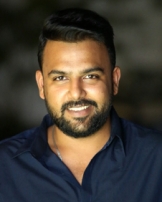 Tharun Bhascker Dhaassyam is an Indian film director. He is known for directing the Telugu language romantic comedy film Pellichoopulu (2016), which won him the National Film Award for Best Feature Film in Telugu, and award for Best Screenplay - Dialogues.

Tharun's father hails from Waddepally a town in Warangal district . He was brought up in Marredpally in Hyderabad, Tharun is an alumnus of Hyderabad Public School and a mechanical engineering graduate from Swami Vivekananda Institute of Technology. He is a graduate of New York Film Academy.

He started his career with short films and has directed many short films like critically acclaimed short film with Vinoothna Geetha Media, Anukokunda, and Sainma, a hit on YouTube channel.

The recent movie Pellichoopulu got a huge response and high success rate. The directors like SS. Rajamouli, Sukumar and many Tollywood famous personalities appreciated his work on Pellichoopulu. He used the character arcs of Judd Apatow’s Knocked Up as references for Pelli Choopulu.