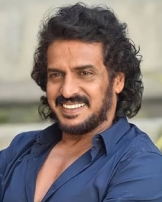 Upendra is a Kannada cinema director, actor and script writer. Born in a middle-class family, Upendra started his career off with film director Kashinath as a writer and an assistant director. His first directorial venture was Tharle Nanmaga.

In the late 90s, he broke into the scene with the extremely violent Om, which also starred actual Bangalore gangsters. He followed this up with A, in which he starred. Upendra, in his next film, had Raveena Tandon (a popular Bollywood actress) as his leading lady. His two films "A" and "Upendra" explore human emotions in a new dimension.

Tharle Nanmaga, his maiden venture as a director, was declared a major success. This film was Jaggesh's first movie as a lead actor. This cult hit is popular even today for its slapstick comedy and out-of-the-box narration.

His second movie Sshhh with Kumar Govindu in the lead was another box office success. This surprise suspense thriller also starred Kashinath and introduced Kumar Govindu as a mainstream hero. Interestingly, it has a small cameo by Uppi as a brash youth in a police costume. His next directorial venture “Om” was a super-hit movie starring Shiv Rajkumar and Prema.

This story explored and exposed the Bangalore underworld. The movie was controversial because of the presence of numerous famous real-life rowdy sheeter(s) (underworld gang members). It had a sound track with hit numbers like "Hey Dinakara", "Mehbooba", "College Kumaru", etc.