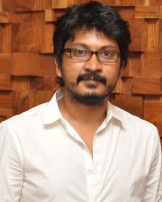 Vishnuvardhan Kulasekaran is an Indian film director of Tamil language films. A one time associate of Ram Gopal Varma, Santosh Sivan and Mani Ratnam, Vishnu graduated from the Prestigious St. Bede's School in Chennai and was a visual communication student who studied at the Loyola College at Chennai. As a child, Vishnu had also done small roles in Mani Ratnam's Anjali and later on during his teenage years, continued to do brief roles in films like The Terrorist, Fiza, Malli and Asoka. He is the brother of actor, Krishna Sekhar.

Career
Influenced by the directing styles of Mani Ratnam and Santosh Sivan, he expressed his wishes of directing to Santosh Sivan on the sets of Asoka. Realizing his dream, Santosh agreed to accept him as his apprentice. During this period of time, Vishnu observed everything that went on behind and around the camera, from the positioning of the lights and directing the artistes and arranging the frames and sets, to the finer points of correcting the artistes and even stayed back even to clean the sets. Santosh Sivan later also took him as an associate director for films like Malli and Asoka. In an interview, Vishnu has stated that he strives to make his films look "raw and realistic".

He made his debut through his own production, Kurumbu starring Allari Naresh and Diya which was a remake of a Telugu language film. The film did not do well at the box office and Vishnu was almost written off by most critics. He later came back with a bang with the immensely successful Arinthum Ariyamalum starring Arya, Navdeep and Samiksha. The film, made at a moderate budget, emerged to be one of the biggest hits in 2005. The film was produced by Geetha, a popular Malaysian radio jockey who after hearing the script from Vishnu, immediately expressed interest in making the film.

Geetha and Vishnu then collaborated once more in the critically acclaimed Pattiyal which also proved to be successful. The film which starred Arya, Bharath, Pooja and Padmapriya was well known by its outstanding music by Yuvan Shankar Raja. Vishnu was praised for handling a serious subject whilst still retaining the entertainment factor in the film. In an interview, Vishnu stated that in order to make the film adaptation of his nephew's story more convincing, he had to interact with real lifegangsters and had to study their lifestyle. Vishnu's most recent film, Billa a remake of the yesteryear classic, starring Ajith Kumar, Nayanthara and Namitha, was an all-time blockbuster. He is now set to resume, Sarvam.