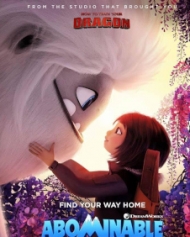 Abominable is a computer-animated adventure film produced by DreamWorks Animation and Pearl Studio. This movie is written and directed by Jill Culton. Chloe Bennet, Albert Tsai, Tenzing Norgay, and others are cast in main roles. It is slated to hit the screens on September 27, 2019.

This film is about a trio who sets on a journey to reunite a magical creature Yeti with his family at the highest point on earth.