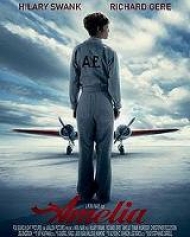 U/A | Biography
Release Date : 2010 (India)
12 Mar 2010 (WorldWide)
Cast : Hilary Swank, Richard Gere
Director : Mira Nair
Synopsis
Amelia is a dramatized biographical film of the life of Amelia Earhart. A look at the life of legendary American pilot Amelia Earhart, who disappeared while flying over the Pacific Ocean in 1937 in an attempt to make a flight around the world.

Amelia Earhart, a Kansas girl, discovers the thrill of aviation at age 23, and within 12 years has progressed to winning the Distinguished Flying Cross for being the first woman to pilot a plane solo across the Atlantic Ocean.

At age 39, she sets out on an attempt to circumnavigate the globe, an adventure that catapults her into aviation myth.