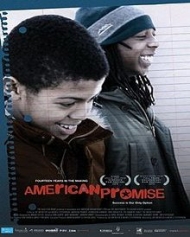 An American Promise is a 13 year documentary journey following two african-american boys from kindergarten through high school graduation at one of the most prestigious private schools in the country.
Story In Detail:
In 1999, two African American boys began kindergarten at the Dalton School, a prestigious independent college-prep school on the Upper East Side of Manhattan.
Over 12 years, we see the boys and their families struggle with learning differences, stereotypes and identity – and ultimately take increasingly divergent paths on their road to graduation. The film puts human faces to the unique social and emotional needs of black boys and calls into question commonly held assumptions about education access and what really influences achievement.
From age five to high school commencement, AMERICAN PROMISE shows that opportunity is just the first step toward African American boys, at all socioeconomic levels, receiving the best education possible.
The audience will see pieces of themselves in the inspiring story of these two boys and that sense of connection is an opportunity to expand the conversation about achievement for all children.