X
#Filmibeat: Best Of 2018. Hurry up & vote!
Vote Now!
Hollywood»Movies»As Good As It Gets 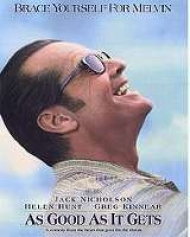 As Good As It Gets

In addition, Carol, the only waitress who will tolerate him, must leave work to care for her sick son, making it impossible for Melvin to eat breakfast.

The trials and tribulations of a compulsive writer, Melvin Udall. After his homosexual neighbor is brutally beaten, he is entrusted to the care of the neighbor's dog, with a difficult relationship with a waitress to add on top of that.

What develops is a weekend trip/triangle between these three individuals,...