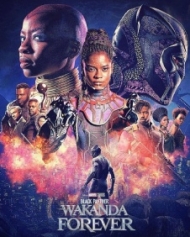 Black Panther:  Wakanda Forever is an American superhero movie directed by Ryan Coogler. The film is based on the Marvel Comics character and is produced by Kevin Feige under Marvel Studios. It is the 30th film in the MCU (Marvel Cinematic Universe) and a sequel to the 2018 Black Panther.
When the lead cast of the film, Chadwick Boseman who played Black Panther died of colon cancer in August 2020, Marvel decided not to recast his role of T'Challa.