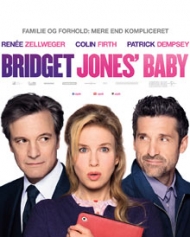 Comedy Romance
Release Date : 23 Sep 2016 (India)
16 Sep 2016 (WorldWide)
Cast : Renee Zellweger, Colin Firth
Director : Sharon Maguire
Synopsis
Bridget Jones's Baby is a romantic comedy movie directed by Sharon Maguire and written by Helen Fielding, Dan Mazer and Emma Thompson. The film stars Renee Zellweger as Bridget Jones.
The movie is based on the fictional columns by Fielding. It is the third film in the franchise and a sequel to 2004 film Bridget Jones: The Edge of Reason.
Bridget's focus on single life and her career is interrupted when she finds herself pregnant, but with one hitch ... she can only be fifty percent sure of the identity of her baby's father.