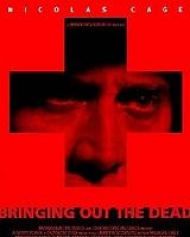 Bringing Out The Dead

Thriller
Release Date : 1999 (India)
22 Oct 1999 (WorldWide)
Cast : Nicolas Cage, Patricia Arquette
Director : Martin Scorsese
Synopsis
Bringing Out the Dead is a 1999 film directed by Martin Scorsese, and based on the novel by Joe Connelly with the screenplay by Paul Schrader. Frank Pierce (Cage), is a paramedic working the graveyard shift in Hell's Kitchen, Manhattan, a neighborhood in New York City, during the early-90s. It takes place over the course of three nights, each night pairing Pierce with a different partner (Goodman, Rhames, and Sizemore).

Complaining of burn out, Pierce suffers from insomnia and begins having visions of a young girl named Rose who died while under his care. Once called Father Frank for his ability to save lives, Pierce starts to fear that he will soon face another life he cannot save, and begins attempting to get fired as his visions of Rose become more frequent.
Cast
Crew
Martin Scorsese
Director
Barbara De Fina
Producer
Scott Rudin
Producer
Elmer Bernstein
Music Director
News
User Review
WRITE YOUR REVIEW
Bringing Out The Dead Comments
In Theaters Now
Upcoming Movies
Hollywood Movies Box Office Collection Updates