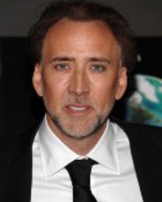 Nicolas Kim Coppola is an American actor, producer and director.

Cage was born in Long Beach, California. His father, August Coppola, was a professor of literature, while Cage's mother, Joy Vogelsang, was a dancer and choreographer; Cage's parents divorced in 1976. Cage's mother is of German descent and his father is of Italian descent (his paternal great-grandparents were immigrants from Bernalda, Basilicata).

His paternal grandparents were Carmine Coppola, a composer, and Italia Pennino, an actress. Through his father, Cage is the nephew of director Francis Ford Coppola and actress Talia Shire, as well as the cousin of directors Roman Coppola and Sofia Coppola, late film producer Gian-Carlo Coppola, and actors Robert Carmine and Jason Schwartzman.

Cage's two brothers are Christopher Coppola, a director; and Marc "The Cope" Coppola, a New York radio personality. He was raised Roman Catholic.

To avoid the appearance of nepotism as the nephew of Francis Ford Coppola, he changed his name early in his career to Nicolas Cage, inspired in part by the Marvel Comics superhero Luke Cage. Since his minor role in the film Fast Times at Ridgemont High, with Sean Penn, Cage has appeared in a wide range of films, both mainstream and offbeat.

He tried out for the role of Dallas Winston in his uncle's film The Outsiders, based on S.E. Hinton's novel, but lost to Matt Dillon. He was also in Coppola's films Rumble Fish and Peggy Sue Got Married.

Cage has been nominated twice for an Academy Award, winning once for his performance as a suicidal alcoholic in Leaving Las Vegas. His other nomination was for his portrayal of real-life screenwriter Charlie Kaufman and Kaufman's fictional twin Donald in Adaptation. Despite these successes, most of his lower-profile films have performed poorly at the box office compared to his mainstream action/adventure roles.

The suspense thriller 8mm (1999) was not a box office success, but is now considered a cult film. He took the lead role in the 2001 film Captain Corelli's Mandolin and learned to play the mandolin from scratch for the part. In 2005, two offbeat films he headlined, Lord of War and The Weather Man, failed to find a significant audience despite nationwide releases and good reviews for his acting in those roles. Poor reviews for The Wicker Man resulted in low box office sales.

The much criticized Ghost Rider (2007), based on the Marvel Comics character, fared better, earning more than $45 million (the top earner) during its opening weekend and over $208 million worldwide through the weekend ending on March 25, 2007. Also in 2007, he made his directorial debut in Sonny and he starred in Next, which shares the concept of a glimpse into an alternate timeline with The Family Man (2000).

Most of Cage's movies that have achieved financial success were in the action/adventure genre. In his second-highest grossing film to date, National Treasure, he plays an eccentric historian who goes on a dangerous adventure to find treasure hidden by the Founding Fathers of the United States.

Other action hits include The Rock, in which Cage plays a young FBI chemical weapons expert who infiltrates Alcatraz Island in hopes of neutralizing a terrorist threat, Face/Off, a John Woo film where he plays both a hero and a villain, and World Trade Center, director Oliver Stone's film regarding the September 11, 2001, attacks.

He had a small but notable role as the Chinese criminal mastermind Dr. Fu Manchu in Rob Zombie's fake trailer Werewolf Women of the S.S. from the B-movie double feature Grindhouse.

In recent years, Cage made his directorial debut with Sonny, a low-budget drama starring James Franco as a male prostitute whose mother (Brenda Blethyn) serves as his pimp. Cage had a small role in the grim film, which received poor reviews and a short run in a limited number of theatres. Cage's producing career includes Shadow of the Vampire, the first film from Saturn Films.

In early December 2006, Cage announced at the Bahamas International Film Festival that he planned to curtail his future acting endeavors to pursue other interests. On the Dresden Files for the Sci-Fi Channel, Cage is listed as the executive producer.

In November 2007, Cage was spotted backstage at a Ring of Honor wrestling show in New York City researching his role for the The Wrestler. The role was ultimately played by Mickey Rourke, who received an Academy Award nomination for his performance.

In 2008, Cage appeared as Joe, a contract killer who undergoes a change of heart while on a work outing in Bangkok, in the film Bangkok Dangerous. The film is shot by the Pang Brothers and has a distinct South-East Asian flavor.

In 2009, Cage starred in sci-fi thriller Knowing, directed by Alex Proyas. In the film, he plays an MIT professor who examines the content of a time capsule unearthed at his son's elementary school. Startling predictions found inside the capsule that have already come true lead him to believe the world is going to end at the close of the week, and that he and his son are somehow involved in the destruction. The film received mainly negative reviews but was the box office winner on its opening weekend.

The film was very well-received by critics, holding a rating of 85% positive reviews on review aggregator website Rotten Tomatoes. Cage received lauds for his performance, with Michael Phillips of the Chicago Tribune writing "Herzog has found his ideal interpreter, a performer whose truth lies deep in the artifice of performance: ladies and gentlemen, Nicolas Cage, at his finest." This film reunited Cage with Eva Mendes, who played his love interest in Ghost Rider.

Cage will star in the period piece Season of the Witch, playing a 14th-century knight transporting a girl accused of causing the Black Plague to a monastery, and The Sorcerer's Apprentice, in which he will play the sorcerer.

He will star in National Treasure 3, which has a possible release date as early as 2011. He will again take the role of Benjamin Gates, a cryptologist-turned-treasure hunter.

In his early 20s, he dated actress/singer Elizabeth Daily for two years, and was later involved with actress Uma Thurman.

In 1988, Cage began dating Christina Fulton, mother of their son, Weston Coppola Cage (born December 26, 1990). Weston appeared in Cage's film Lord of War as Vladimir, a young Ukrainian mechanic who quickly disarms a Mil Mi-24 helicopter and is the lead singer of the black metal band Eyes of Noctum. In December 2009, Fulton sued Cage for $13 million and the house she is living in. The suit was in response to an order that she leave the house, brought about by the financial problems of Cage.

Cage has been married three times. His first wife was the actress Patricia Arquette (married on April 8, 1995, divorce finalized on May 18, 2001).

Cage's second wife was singer/songwriter Lisa Marie Presley, the daughter of Elvis Presley, of whom Cage is a fan and on whom he based his performance in Wild at Heart. They married on August 10, 2002 and filed for divorce on November 25, 2002, after 108 days of marriage; their divorce was finalized on May 16, 2004. The divorce proceeding was longer than the marriage.

His third and current wife Alice Kim, a former waitress who previously worked at the Los Angeles restaurant Kabuki, met Cage at the Los Angeles-based Korean nightclub, Le Privé. She is the mother of his son, Kal-El (born October 3, 2005), named after Superman's birth name.

Cage was once considered for the role of Superman in a film to be directed by Tim Burton. Alice had a minor role in the 2007 movie Next, which Cage produced. They were married at a private ranch in Northern California on July 30, 2004.

Cage had a Malibu home where he and Alice lived, but sold the property in 2005 for $10 million. In 2004, he bought a property on Paradise Island, Bahamas. In May 2006, he bought a 40-acre island in the Exuma archipelago, some 85 miles (137 km) southeast of Nassau and close to a similar island owned by Faith Hill and Tim McGraw.

He once owned the medieval castle of Schloss Neidstein in the Oberpfalz region in Germany, which he bought in 2006 and sold in 2009 for $2.5 million. His grandmother was German, living in Cochem an der Mosel.

In August 2007, Cage purchased a home in Middletown, Rhode Island. The 24,000-square-foot, brick-and-stone country manor occupies 26 acres, has 12 bedrooms, 10 full bathrooms, and ocean views and borders the Norman Bird Sanctuary. The estate is called the "Grey Craig". The sale ranked among the state’s most expensive residential purchases, eclipsed by the 2007 $17.15 million sale of the Miramar mansion on Bellevue Avenue in Newport. Also in 2007, the actor purchased Midford Castle in Somerset, England.

Shortly after selling his German castle, Cage also put homes in Rhode Island, Louisiana, Nevada, and California, as well as a $7 million island in the Bahamas, up for sale.

On July 14, 2009, the Internal Revenue Service filed documents in New Orleans in connection with a federal tax lien against property owned by Cage in Louisiana, concerning unpaid federal taxes. The IRS alleges that Cage failed to pay over $6.2 million in federal income tax for the year 2007.

In addition, the Internal Revenue Service has another lien for more than $350,000 in unpaid taxes dating from 2002 to 2004. Cage filed a $20 million lawsuit on October 16, 2009, against his business manager, Samuel J. Levin, alleging negligence and fraud.

The lawsuit states that Levin "had failed to pay taxes when they were due and had placed [Cage] in speculative and risky real estate investments 'resulting in (the actor) suffering catastrophic losses'." Cage is also facing separate lawsuits from East West Bank and Red Curb Investments for unpaid, multimillion dollar loans.

In his filing Levin says that in 2007 Cage's "shopping spree entailed the purchase of three additional residences at a total cost of more than $33 million; the purchase of 22 automobiles (including 9 Rolls Royces); 12 purchases of expensive jewelry; and 47 purchases of artwork and exotic items."

One of those exotic items was a dinosaur skull of a Tarbosaurus  for which Nicolas Cage paid $276,000 in an auction after winning a bidding contest against Leonardo DiCaprio.

According to Cage, he owned the "Most Haunted House in America", a home located in the French Quarter of New Orleans, Louisiana. The home is known as the "The LaLaurie house" after its former owner Delphine LaLaurie. The house was foreclosed and sold at auction on November 12, 2009 along with another New Orleans property for a total of $5.5 million, in the wake of his financial problems.

His Bel Air  home, which had six loans totaling $18 million on it, sold at a foreclosure auction on April 7, 2010, for nearly $25 million less than Cage's original asking price. Another home in Nevada also faces foreclosure auction.

Nicolas Cage remains as one of Hollywood's highest paid actors, earning $40 million in 2009 according to Forbes Magazine.

Nicolas was director Sam Raimi's first choice to play Norman Osborn/Green Goblin in the movie Spider Man. He has created a comic book, with his son Weston, called Voodoo Child, which is published by Virgin Comics.

Cage was close friends with Ramones guitarist Johnny Ramone. His enthusiasm of classic cars is well known; in 1997 via telephone bid, he broke the auction record for Lamborghinis when he placed a bid on a rare Miura SVJ for US$490,000. He has also been a fan and collector of painter and underground comix artist Robert Williams. He has written introductions for Juxtapoz magazine and purchased the painting Death On The Boards.