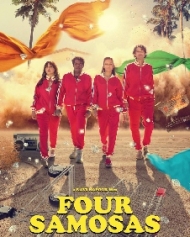 Four Samosas is an action comedy-romance film written and directed by Ravi Kapoor. The movie stars Venk Potula, Sonal Shah, and Sharmita Bhattacharya in the lead roles, along with Nirvan Patnaik, Karan Soni, and many others in supporting roles.

Aakash Raj handled the cinematography, and the movie was edited by Anisha Acharya. Sagar Desai scored the background music for this film. The movie Four Samosas was produced by Ravi Kapoor and Rajiv Maikhuri under the banners of Junglee Films, Khrisp Entertainment, and Creative Rebel Productions.

Like an action comedy drama, Four Samosas presents the storyline of an uninterested South Asian American popstar who intends to play a trick on a supermarket run by his girlfriend's ex-father with the help of multiple of those certain novice robbers in order to grab her bridal jewels and sabotage her upcoming marriage.

On December 2, 2022, the film Four Samosas was released in theaters.