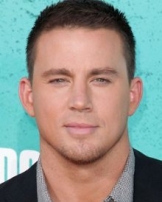 Channing Tatum was born in Cullman, Alabama, the son of Kay, an airline worker, and Glenn Tatum, who worked in construction. His ancestry includes Irish, French and Native American. Tatum's family moved to Mississippi when he was six, and he grew up in the bayous near the Mississippi River, where he enjoyed a rural existence.

Tatum was athletic while growing up, playing football, soccer, track, baseball, and performing martial arts; he has said that "girls were always [his] biggest...