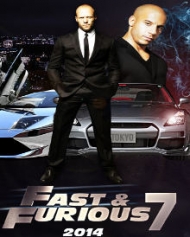 Furious 7 (previously known as Fast & Furious 7) is an upcoming American action film. It is the seventh installment in the Fast & Furious film series. The film was written by Chris Morgan and directed by James Wan. It stars Vin Diesel, Paul Walker, Dwayne Johnson, Michelle Rodriguez, Jordana Brewster, Lucas Black and Jason Statham.
It is the first film of the series to take place after the events in The Fast and the Furious: Tokyo Drift, with the three previous installments being set between 2 Fast 2 Furious and Tokyo Drift. This will mark the final film appearance of Paul Walker who died on November 30, 2013, while the film was still in production.
Plot
Furious 7 is set to take place after Fast & Furious 6. After defeating Owen Shaw and his crew, Dominic Toretto (Vin Diesel), Brian O'Conner (Paul Walker) and the rest of the crew are able to return to the United States and live the normal life again as they had wanted, but Owen's older brother, Ian Shaw (Jason Statham), is after Dominic, seeking revenge for the death of his brother, putting the entire crew in danger once more. After learning of Han's death, the crew sets out to find the man who killed one of their own, before he finds them first.