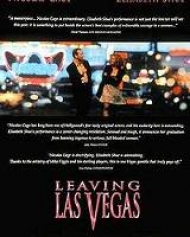 Romance
Release Date : 1995 (India)
27 Oct 1995 (WorldWide)
Cast : Nicolas Cage, Elisabeth Shue
Director : Mike Figgis
Synopsis
Leaving Las Vegas is a romantic drama film. Because his wife left him and took his son with her, screenwriter Ben Anderson has started drinking, a lot. He's getting more and more isolated and he troubles women in bars because he wants to have sex with them.

When he gets fired, he decides to leave everything behind and move to Las Vegas and drink himself to death. In Las Vegas he meets Sera, a prostitute with some problems as well who he moves in with.