Legend Of The Guardians 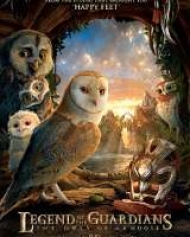 Legend Of The Guardians

Animation
Release Date : 2010 (India)
24 Sep 2010 (WorldWide)
Cast : Emilie De Ravin, Helen Mirren
Director : Zack Snyder
Synopsis
Legend of the Guardians is an animated film based on the series of children's fantasy books Guardians of Ga'Hoole by Kathryn Lasky. Soren, a young barn owl, is kidnapped by owls of St. Aggie's, ostensibly an orphanage, where owlets are brainwashed into becoming soldiers.

He and his new friends escape to the island of Ga'Hoole, to assist its noble, wise owls who fight the army being created by the wicked rulers of St. Aggie's. The film is based on the first three books in the series.