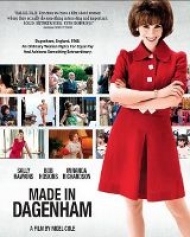 Comedy
Release Date : 2010 (India)
20 Sep 2010 (WorldWide)
Cast : Sally Hawkins, Miranda Richardson
Director : Nigel Cole
Synopsis
Made in Dagenham is a British film directed by Nigel Cole. The film is a dramatisation of the 1968 Ford sewing machinists strike at the Ford Dagenham assembly plant, where female workers walked out in protest against sexual discrimination and the desire for equal pay. The walkout was instrumental in the Equal Pay Act 1970. The women did not actually work at the Dagenham assembly plant but a mile or so away on the other side of the rail tracks at the River Plant (a collection of sheds) on Sammy Williams land near Dagenham Dock Station. The Halewood-based women also joined the strike.